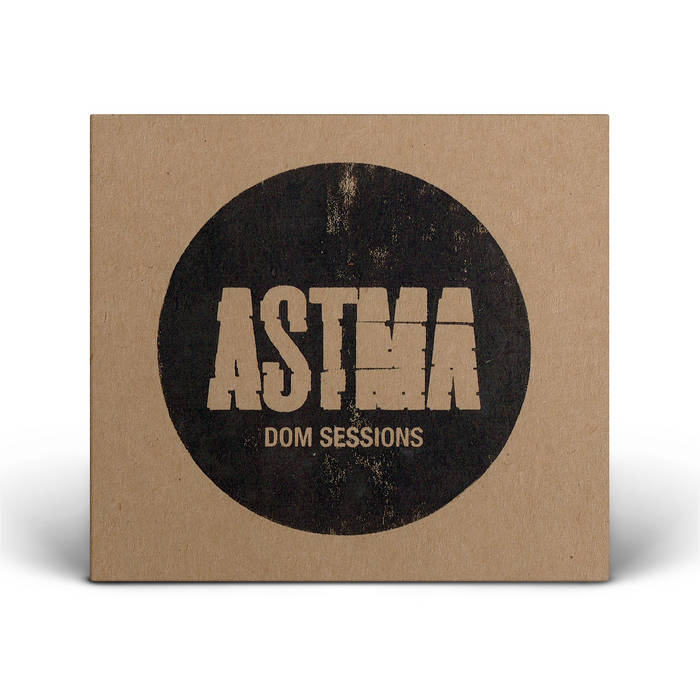 Olga Nosova and Alexei Borisov started to play as the duo ASTMA in Spring of 2009. Dom session was their first professional recording experience, organized quite spontaneously at the legendary Dom, the concert venue for experi- mental and improvised music in moscow. Anton Nikkilä (long term collaborator of Alexei Borisov) had just arrived from Helsinki to perform at Noise and Fury festival curated by Borisov in moscow, so the three teamed up to record the DOM SESSIONS. All tracks are the result of improvisations, recorded on eight tracks, without any additional overdubbing or editing.

The duo with Olga Nosova (drummer and vocalist mostly known for her work with Moscow fusion band “Syncopated Silence” and post-punk band “Motherfathers”) is one of the latest projects of veteran of Russian industrial/electronic/ free improv scene Alexei Borisov and noticeably very fast-developing - their mind-boggling and powerful music is already highly acclaimed among the music lovers not only in Russia, but around the world!

About Anton Nikkilä:
Anton Nikkilä (born 1965) is an experimental musician and composer who lives and works in Helsinki. He started mak- ing music in the ”post-punk” milieu of the early 80’s, ran the cassette label Valtavat Ihmesilmälasit Records in 1980–82 and attended John Cage’s summer courses in Finland in 1983. Later during the 1980’s he was actively involved in Russian underground rock as a translator (which subsequently became his official profession) and in many other roles, including journalist and festival organiser (to which he returned later when working as the director of Avanto Helsinki Media Art Festival in 2003–2005). In the early 90’s he studied Russian literature and musicology and became father of two children.

Anton Nikkilä’s first solo album ”Formalist” was released by Moscow’s Exotica label in 1998. In 2000 he started the N&B Research Digest label with Alexei Borisov, his musical collaborator since the mid-90’s. Their duo, based on Nikkilä’s compositions, Borisov’s texts and improvised noise by both, has produced two studio albums and two live albums.
”You’ve never heard the cut-up and sample thing done with such absurdist, insane panache and vigour. (...) Some- how Anton knows exactly how to control all of his elements – distortion, programming, unpredictable electronic ef- fects – into a perfect, constantly mutating chimera of sounds that cannot possibly exist. It’s like seeing the Tatlin tower remade out of breadcrumbs and plasticine, spinning around at the top of a mountain. Despite their atomised approach to de-constructing the song form (and the dance music form, to some extent), this intelligent duo still manage to ask many pointed and searching questions about the geo-political state of the world today.”
(Ed Pinsent about Borisov & Nikkilä’s ”Live at Belly”, The Sound Projector 17, November 2008)

”Since the early 1990’s, the Russian Alexei Borisov and the Finn Anton Nikkilä have been engaging in a cross-cultural dialogue invigorated rather than encumbered by the complex and conflicted political relationship of their native coun- tries. Their conclusions have mostly been published by their own N&B Research Digest imprint. Nikkilä states that three ideas lie behind the label’s mock-institutional facade and plainspeak notes: conceptualism, experimentalism and archival work.” (Matthew Wuethrich, The Wire, July 2008)

“Experimental music is not dependent on institutional definitions; it constitutes a field, albeit fragmentary, of its own - a no man’s land. The electro-acoustic music of Anton Nikkilä, for example, a musician with an avant-punk background, neatly defies all conventional definitions. His minimalist industrial dada is equally at home in clubs and in concert halls reserved for classical music.”
(Tanja Uimonen, Finnish Music Quarterly 3/2007)

Special thanks to Nick Dmitrijev, Alexander Markov and the crew of The Dom CC.